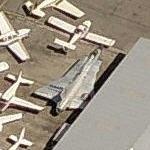 By kjfitz @ 2009-05-06 08:28:32
@ 37.892569, -121.242131
Stockton, California (CA), US
The Saab 35 Draken (Dragon) is a second-generation supersonic interceptor with a distinctive double delta wing. The decision to develop the Saab 35 Draken supersonic fighter, which introduced what was perhaps the most daring chapter so far in the history of the Swedish aircraft industry, had been taken as far back as 1949. After much research including flight-testing of a 70 percent scale aircraft, the first prototype of the innovative double-delta Draken flew in late 1955 and Sweden’s first Mach 2 fighter was a reality, entering production in 1957.

The J35A Draken entered service in 1959 and was followed by five different versions for the Swedish Air Force, including the all-weather J35F with its then advanced radar, infra-red search and track system, and both radar and IR guided missiles. In all, 612 Drakens were built between 1955 and 1972. Of these, 51 were exported to Denmark, Finland assembled 12 under license and later bought a number of ex-Swedish aircraft, and Austria ordered 24 modified Drakens.

The single-seat combat aircraft has, a single engine and is equipped with two 30mm automatic cannons and Sidewinder air-to-air guided weapons. The fuselage is round with small canopy, extending beyond the trailing edge of the tail fin, which is small and is highly swept along both leading and trailing edge. Small oval air intakes are located on either side of the fuselage. There are several versions of this aircraft and the type can operate from small airfields.
Links: www.wolfeaviation.com
7,714 views