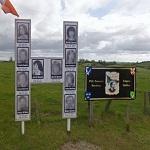 By tallturtle82 @ 2015-09-09 08:42:24
@ 54.5377612, -6.8854141
Dungannon, United Kingdom (GB)
The 1981 Irish hunger strike was a protest during "the Troubles" by Irish Republican captives in Northern Ireland who were tired of being treated like ordinary convicts. Originally the republican prisoners were held as political prisoners or Special Category Status. This changed in 1976 causing five years of protests. The 1981 hunger strike was the second such strike and ended five years of protests starting with the blanket protest in 1976.

Bobby Sands received the majority of the attention as he was elected to Parliament during the strike.
Links: en.wikipedia.org
322 views