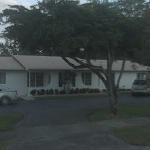 By kkeps @ 2010-06-07 15:03:04
@ 25.656906, -80.326372
Pinecrest, Florida (FL), US
The FBI Miami shootout was a gun battle that occurred on 11 April 1986 in Miami, Florida between eight Federal Bureau of Investigation (FBI) agents and two serial bank robbers. The firefight claimed the lives of Special Agents Jerry L. Dove and Benjamin P. Grogan. The two robbery suspects, William Russell Matix and Michael Lee Platt were also killed. In addition, five FBI agents were wounded in the incident. The incident is infamous in FBI history and is well-studied in law enforcement circles. Despite outnumbering the suspects 4 to 1, the agents found themselves pinned down by rifle fire and unable to respond effectively. Although both Matix and Platt were hit multiple times during the firefight, Platt fought on regardless and continued to injure and kill the officers. This incident led to the introduction of more powerful handguns in many police departments around the country.
Links: en.wikipedia.org
4,638 views