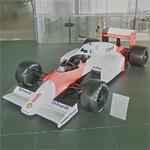 Carrying the #1 of the defending champion, Prost's four victories and eleven podium (top-3) finishes allowed him to win consecutive titles. He won by two points over England's Nigel Mansell.

The car was sponsored by Marlboro, but McLaren has removed the Marlboro brand from all of the cars in this museum.
Links: en.wikipedia.org
571 views