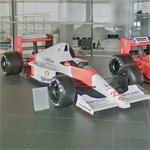 Senna's six wins and eleven podium (top-3) finishes earned him his second Formula One title. Senna clinched the championship after he intentionally collided with former teammate Alain Prost in the first turn of the Japanese Grand Prix.

The car was sponsored by Marlboro, but McLaren has removed the Marlboro brand from all of the cars in this museum.
Links: en.wikipedia.org
542 views