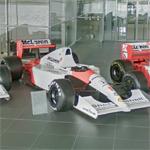 Senna won seven times and had twelve podium (top-3) finishes to give him his third and final championship.

The car was sponsored by Marlboro, but McLaren has removed the Marlboro brand from all of the cars in this museum.
Links: en.wikipedia.org
701 views