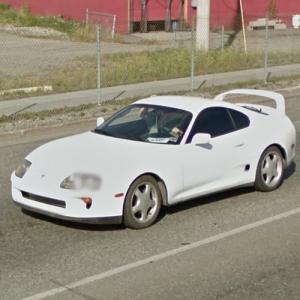 By Carrera @ 2018-05-26 03:32:42
@ 64.8362597, -147.7175881
Fairbanks, Alaska (AK), US
The A80 Toyota Supra is revered by many as the best generation of the grand tourer, being extremely popular among the tuner community. Prototypes initially built in 1991 and 1992 eventually became the 1993 Supra that replaced the A70, entering production in April of that year. While a naturally-aspirated 2JZ I6 engine was available, more attention is paid to the twin-turbocharged version of that same engine, in which with it, it has been praised for its handling, performance, and even the sound of its turbos. With the twin-turbocharged 2JZ, 60 miles per hour was attained in 4.6 seconds, and while it has been limited to a speed of 155 miles per hour, many say it can at least reach 180 without a governor. The turbochargers operated in sequential mode, in which the exhaust is directed to the first turbine, which reduces turbo lag and allows it to go under effect at RPMs as low as 1800. Once at 3500 RPM, in which it had already made 300 lb-ft of torque, a "pre-boost mode" is achieved as the second turbine takes in exhaust too, in which after 500 RPM increase, the output of that turbocharger goes under effect. The Supra stopped being exported into the Canadian market in 1996, and followed by the U.S. market in 1998 (1997 was the last model year for Turbos in states following CARB emissions regulations), in which production finally ended worldwide in 2002. A Toyota Supra of this generation (1995 model year in this case) was used by the late Paul Walker in the original Fast and the Furious film. The Supra nameplate is expected to return as a G29 BMW Z4-based coupe that only comes with an automatic transmission.