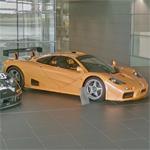 After winning the 1995 24 Hours of Le Mans, McLaren built five F1 GTR's in honor of the five McLaren's that finished the 24 hour race. A sixth prototype, the XP1-LM, was also built, but never sold. It is reportedly worth $4 million.

Former McLaren Formula One driver Lewis Hamilton loved this car. McLaren promised to give him the car if he won two championships for the team. He won the title in 2008, but left the team after 2012 to drive for Mercedes AMG.
Links: en.wikipedia.org
935 views