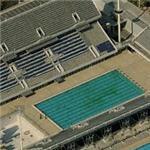 By kjfitz @ 2007-10-03 12:35:39
@ 38.038512, 23.781295
Athens, Greece (GR)
The Olympic Aquatic Centre is a complex at the Athens Olympic Sports Complex, consisting of two outdoor pools and one indoor pool, that was built for the 1991 Mediterranean Games. It was refurbished and expanded for the 2004 Summer Olympics. The larger of the outdoor pools, which seats 11,500 spectators, hosted swimming and water polo events. The smaller pool, which hosted synchronized swimming, sat 5,300 fans. The indoor pool, which hosted the diving events, sat 6,200 observers.

The outdoor pool was the subject of significant controversy during the run-up to the Olympic games. A roof was planned that would have shielded the swimmers from the blazing Athens sun was later scrapped, leaving the athletes and most of the fans without shade during the events; however, during the course of the games, there were no major complaints made by the athletes regarding the facility, nor was there any mention of the lack of a roof affecting athletes' performances - in fact, many Olympic and world records were broken and/or set in this FINA-approved, world-class venue.
Links: en.wikipedia.org
1,550 views