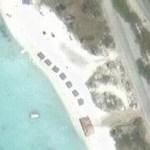 Holloway's disappearance was first discovered by her classmates, who were in Aruba celebrating their graduation from Mountain Brook High School, when she did not arrive at the airport for her return flight. Holloway was last known to have been seen outside of Carlos'n Charlie's, a local restaurant, with Joran van der Sloot and brothers Deepak and Satish Kalpoe, but the three men denied knowing what happened to her, stating that they had dropped Holloway off at a Holiday Inn where she was staying. Van der Sloot was arrested twice on suspicion of involvement in her disappearance and the Kalpoes were also arrested three times each, and each was released each time due to lack of evidence.

Aruban investigators conducted an extensive search of the island for Holloway, with the help of thousands of volunteers. FBI agents also participated in the search, as did fifty Dutch soldiers and specially equipped Dutch F-16s. The searches were without result, and Holloway remains officially missing to this day, although according to Aruban authorities she is most likely dead.