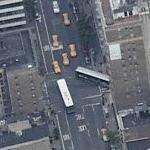 Officials in New York and Washington promptly ruled out terrorism. One person died of cardiac arrest and about 20 others were injured, some seriously, Mayor Michael Bloomberg said at a news conference.

Boiling, brownish water and steam gushed geyser-like at least 120 feet high out of a crater about 20 feet wide on Lexington Avenue at 41st Street, one of the busiest areas of New York City near the Grand Central transportation hub.
Links: news.yahoo.com
984 views