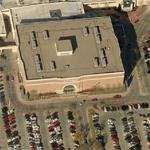 Sgt. Teresa Negron said most of the dead were inside Von Maur department store at Westroads Mall. She added that the shooter acted alone. The gunman was found dead on the third floor of Von Maur.
Links: www.nbcnews.com
1,271 views