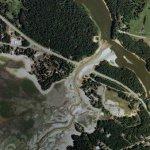 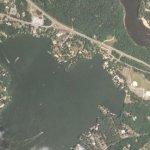 Several days of heavy rain in 2008 led to the washing out a section of land along the northern shore, creating a new channel that caused the lake to drain into the nearby Wisconsin River. Television cameras captured dramatic scenes of homes being torn from their foundations and being carried down the river.

Plans are underway to repair the washed out shoreline with hopes that the lake will be refilled before the 2009 tourism season begins. Volunteers have taken advantage of the situation by removing trash from the lakebed.
Links: en.wikipedia.org, www.youtube.com
1,740 views

milwhcky
@ 2009-01-26 19:25:21
Repairs to the washed out section of land and roadway were completed in November 2008. The nearby dam was also improved to prevent a future breach. The lake is slowly taking in water and should be back to normal by spring 2009.