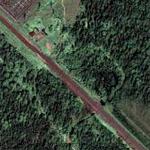 By kkeps @ 2012-11-26 20:03:37
@ 58.127379, 33.672495
Uglovka, Russian Federation (RU)
The 2009 Nevsky Express bombing occurred on 27 November 2009 when a bomb exploded under a high speed train travelling between the Russian cities of Moscow and Saint Petersburg causing derailment near the town of Bologoye, Tver Oblast (approximately 200 miles or 320 kilometres from Moscow), on the Moscow–Saint Petersburg Railway. The derailment occurred at 21:34 local time (18:34 UTC). Russian officials had stated that 39 people were killed and 95 injured but later retracted the death toll, with 27 deaths reported as of December 2. A second bomb exploded at the scene of the investigation the following day, injuring one. It was reported to have been triggered by a remote mobile phone.

The government confirmed that the accident was caused by terrorists, making this attack Russia's deadliest outside the North Caucasus region since the 2004 Russian aircraft bombings.
Links: en.wikipedia.org
516 views