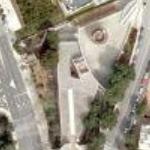 By Mike1989 @ 2012-03-30 00:37:22
@ 39.515335, 2.534553
Palmanova, Spain (ES)
The 2009 Palma Nova bombing occurred on July 30, 2009 when a limpet bomb went off outside a Civil Guard barracks in the town of Palma Nova, Majorca, Spain. The bomb was placed under a patrol car and two Civil Guard officers died as a result of the explosion. A second device was found under another Civil Guard vehicle at nearby barracks and safely exploded by police. On August 9, the Basque nationalist and separatist organisation ETA claimed responsibility for the attack, while four other bombs exploded around restaurants and shopping centres in Palma, Majorca, causing no injuries.

The bombing was ETA's first attack in Majorca since it tried to kill King Juan Carlos I in the summer of 1995, and its deadliest attack since it killed two Civil Guard officers in Capbreton, France in 2007. The attack came on the eve of the 50th anniversary of ETA's founding, and days before the King's yearly visit to Majorca.
Links: en.wikipedia.org, es.wikipedia.org
636 views