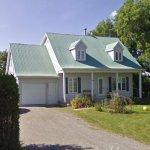 By milwhcky @ 2010-05-12 15:39:21
@ 45.804103, -72.963829
St Jude, Canada (CA)
A family of four was in their basement watching the Montreal Canadiens play the Pittsburgh Penguins in game six of the NHL's second round playoff series when tragedy struck. A landslide that slid towards a small river located behind the house caused a large sinkhole that quickly filled this house's basement with clay.

Richard Préfontaine, his wife Lyne, and daughters Anaïs and Amélie did not survive. A driver of a pickup truck which drove into the sinkhole suffered a concussion. It took him over an hour to climb from his truck and get help.

This house was located 60 km east of Montreal in the countryside on relatively flat land. This was eerily similar to a nearby landslide which killed 31 people while the Montreal Canadiens played in a 1971 Stanley Cup Final game.
Links: www.cbc.ca
738 views