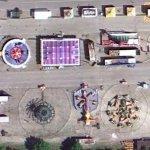 Google Earth dates this as May 27, 2010 - one day before the festival began.
Links: www.chocolatefest.com
790 views