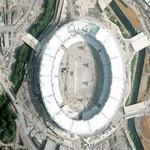 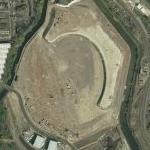 By kjfitz @ 2010-02-04 16:10:49
@ 51.53855107, -0.01613593
London, United Kingdom (GB)
The London Olympic Stadium will be the centrepiece of the 2012 Summer Olympics. The stadium will be located at Marshgate Lane in Stratford in the Lower Lea Valley and will have a capacity for the Games of approximately 80,000 making it temporarily the third largest stadium in Britain behind Wembley Stadium and Twickenham Stadium. Land preparation for the stadium began in mid 2007, with the official construction start date on 22 May 2008, although piling works for the foundation unofficially began four weeks ahead of that date.
Links: en.wikipedia.org
1,778 views