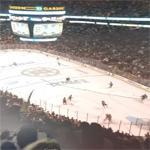 This rather blurry photosphere appears to be from the 2013 Stanley Cup Final series between the Boston Bruins and Chicago Blackhawks. Google dates this from June 2013, and there is a fan wearing a Patrick Sharp Chicago jersey in front of the photographer. The video screen shows what looks like a graphic with the Stanley Cup between both team's logos.