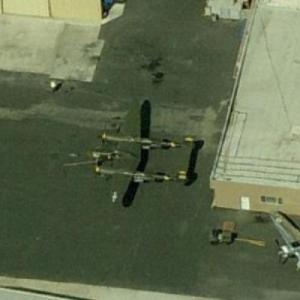 By Pdunn @ 2009-11-09 13:22:02
@ 33.981382, -117.64028
Chino, California (CA), US
"Easily one of the most recognizable fighters of its time because of its distinctive twin-boom design, the Lockheed P-38 Lightning was one of the most famous American warplanes of World War Two and the mount of America's two top aces—Dick Bong, who scored 40 aerial victories, and Tommy McGuire, who was credited with 38 kills. However, although more than 10,000 Lightnings were built during the war, the big fighter did not fit into the Air Corps' post-war plans and was soon retired from service.

Today, there are probably fewer than a score of intact Lightning airframes left in the world and only about half a dozen of those are flyable or restorable to flying condition. The most recent Lightning to be restored to flying condition is P-38J-20-LO serial 44-23314 which, after 28yr of inactivity, took to the skies once more at the Chino Airport in Southern California on July 22, 1988. Bearing the civil registration N29Q, this aircraft belongs to The Air Museum's "Planes of Fame" collection and was the object of a 13-month restoration project by Steve Hinton's Fighter Rebuilders crew at Chino and "Planes of Fame" volunteer workers.

Including its wartime service with the Army Air Corps, 44-23314 had a total of only 121hr on its airframe before restoration. It just flew for a short time with training squadrons in Texas and Florida during the last year of the war before being declared surplus."
2,126 views