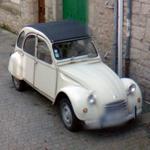 By dda @ 2008-07-09 18:06:54
@ 47.665482, -2.985478
Auray, France (FR)
The Citroën 2CV (French: deux chevaux vapeur, literally "two steam horses", from the tax horsepower rating) was an economy car produced by the French automaker Citroën from 1949 to 1990. [3] It is considered one of their most iconic cars. It was described in the book Drive On!: A Social History of the Motor Car by longtime CAR magazine columnist the late LJK Setright as 'The most intelligent application of minimalism ever to succeed as a car.' It was designed for low cost, simplicity, versatility, reliability, and off-road driving. For this it had a light, easily serviceable engine, extremely soft suspension, high clearance, and for oversized loads a car-wide canvas sunroof. Between 1948 and 1990 3,872,583 2CVs were produced, plus 1,246,306 camionettes (small 2CV trucks), as well as spawning mechanically identical vehicles like the Ami, Dyane, Acadiane, and Mehari.

From 1988 onwards production took place in Portugal rather than in France. This arrangement lasted for two years until 2CV production halted.
Links: en.wikipedia.org
989 views