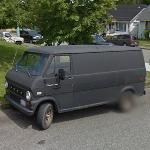 By kkeps @ 2013-08-04 12:50:55
@ 49.210565, -122.936821
New Westminster, Canada (CA)
The Second Generation Ford E-Series revolutionized US van design by moving the engine all the way to the front under a short hood, as they had done with the European market 1965 Ford Transit. These would be the first vans used as the basis for the now popular Class C van cab motorhomes, a class still dominated by Ford. This E-Series also used Ford's "Twin I-Beam" front suspension design, and was now available with a V8 engine. Over the next six years, the Big Three would all redesign their vans, with hoods gradually evolving to a short conventional truck-like hood, and evolving from being based on compact cars to using components from full-sized pickup trucks.
Links: en.wikipedia.org
637 views