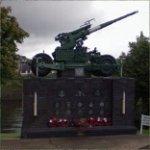 It is a 'Monument To The Air Defence of Swansea' and dedicated to the heroic people of Swansea, who lost their lives or who were wounded, on those fateful nights, in February 1941, during WW2.
Links: www.waymarking.com
1,574 views