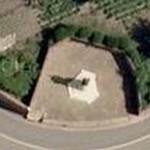 During the initial attack by VI Corps the 37th Division found themselves as the reserve behind the 3rd, 12th and 15th Divisions. Following the opening attack at 0530 hours the plan expected the line to have advanced as far forward as La Chapelle de Feuchy by 1500 hours.
Links: www.webmatters.net
366 views