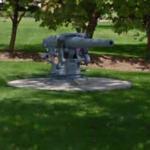 USS Ward (DD-139) was a Wickes-class destroyer in the United States Navy during World War I, later APD-16 in World War II.

She fired the first American shot in World War II, when she engaged the Japanese during the attack on Pearl Harbor, and successfully sank her opponent.
Links: en.wikipedia.org, en.wikipedia.org
737 views