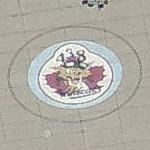 Equipped with CH-146 Griffons , 438 Squadron supports the various militia elements in the region.

With a typical staffing level of over 60-percent reservists, 438 Squadron typifies the Total Force concept in which highly trained Reserve Forces are relied upon to augment regular CF units for international commitments and domestic operations.

438 Squadron had its roots as a fighter-bomber squadron during World War II. At that time, it flew Hurricanes and Typhoons. After the war, it was equipped with Vampires and Sabres , becoming 438 "City of Montreal" Squadron Reserve .