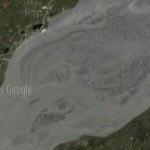 "How is the bridge going to pay for itself?" asks Susan Walsh, Sallee's wife, who works as a nurse in Ketchikan. She notes that a ferry, which runs every 15 minutes in the summer, already connects Gravina to Ketchikan. "It can get us to the hospital in five minutes. How is this bridge fair to the rest of the country?" [...]

Included in the bill's special Alaska projects is $231 million for a bridge that will connect Anchorage to Port MacKenzie, a rural area that has exactly one resident, north of the town of Knik, pop. 22. The land is a network of swamps between a few hummocks of dry ground. Although it may or may not set the stage for future development, the bridge, to be named "Don Young's Way," will not save commuters into Anchorage any time, says Walt Parker, a former Alaska commissioner of highways.
Links: www.salon.com
9,581 views

Anonymous
@ 2006-01-15 15:26:58
What the person submitting the comment chooses not to discuss is the small matter that both bridges will provide reliable access to the last developable land in the area. The human population is increasing and there's no new housing for them. Many of the opponents of the bridges are those who own real estate and have seen their housing values soar.

Perhaps New York City residents would like to see the bridges to Staten Island torn down. After all, a ferry is good enough, isn't it.

Anonymous
@ 2006-01-16 03:21:03
^ A very Valid arguement, I would agree with you in every way with the exception , I live in the area and Those areas will not grow near enough to make the bridge a nessasary utility. Sorry pal.

Anonymous
@ 2006-01-16 03:22:39
^ Update The only valid bridge would be teh anchorage to mackenzie point, As the ferries are often out fo comission and its a 2 hour drive up past eagle river through wasila