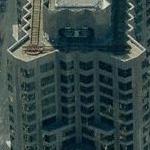 A 70 percent interest was acquired by Vornado Realty Trust from foreign investors in March 2007 with a 30 percent limited partnership interest still owned by Donald Trump, while continuing to be managed by the Shorenstein Company.