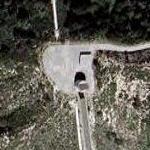 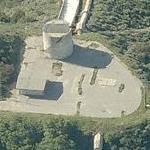 The Cascades is the point where the Los Angeles Aqueduct symbolically enters the city, bringing in 70 percent of the drinking water for the community, from the Owens Valley, about 300 miles away. Three parallel water courses can be seen on the hill here: a long pipe is the main pipe of the 1970 aqueduct; the open channel is the spillway for the 1970 aqueduct; and the pipe emerging half way down the hillside on the left of the spillway is the original 1913 aqueduct, which is still in use. It was next to this pipe where William Mulholland stood on the aqueduct's opening day in 1913, addressing the assembled citizens, saying "This rude platform is an altar, and on it we are here consecrating this water supply and dedicating this Aqueduct to you and your children and your children's children-for all time." After this the valve that allowed the water to spill down this last slope, before entering into the water distribution system for the city, was turned, and as the water spilled downslope Mulholland said "There it is Mr. Mayor. Take it." In 1999, the DWP activated a new lighting system that illuminates the spillway in a colorful display.
Links: clui.org
2,495 views