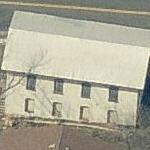 The building in which the distillery operated was constructed in 1892, serving as the town hall for Wiehle, as well as a church. It was listed on the National Register of Historic Places by the National Park Service in 1999.
Links: en.wikipedia.org
878 views