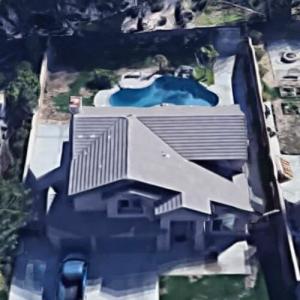 By jdubble07 @ 2019-03-07 08:49:09
@ 34.6500963, -118.2502454
Lancaster, California (CA), US
Aaron Carter, the pop star and younger brother of Backstreet Boys member Nick Carter purchased this Lancaster home in October 2018 for $430,000. Carter is best known as an American rapper, singer, songwriter, actor, dancer and record producer who first came to fame as a pop and hip hop singer in the late 1990s. Carter established himself as a star among pre-teen and teenage audiences during the first years of the 21st century with his four studio albums, but was unable to sustain this success.

Born into a show business family, Carter began performing at age seven and released his self-titled debut album in 1997 at just age 9. This record went on to sell a million copies worldwide. His second album Aaron's Party (Come Get It) sold three million copies in the United States. To boost his fame, Carter began making guest appearances on Nickelodeon and touring with the Backstreet Boys, with his brother Nick Carter, shortly after the record's release. Carter's next album, Oh Aaron, also went platinum, and the musician released what would be his last studio album for 16 years, Another Earthquake!, in 2002, followed by his 2003 Most Requested Hits collection. This marked a downward turn in his career, which Aaron never quite recovered from.

Carter in an effort to recover his former fame, has since appeared on Dancing with the Stars, the Broadway musical Seussical, the off-Broadway musical The Fantasticks, and made several one-off performances. In 2014, he announced that he would begin releasing new music, yet again, and began by releasing a single featuring rapper Pat SoLo, Ooh Wee, which was first offered as a free download with purchase on his web store. Following this, Carter released the single, "Fool's Gold", on April 1, 2016, and an EP titled LøVë in February 2017. His fifth studio album of the same name was released on February 16, 2018, but did not achieve the success of his previous releases.

Aaron Carter has a net worth of $400 thousand. In November 2013, Aaron Carter filed for bankruptcy in the state of Florida citing $3.5 million in debt. In the bankruptcy filing, Carter lists total assets at just $8,232.16. Most of the liability came from earnings during the height of his popularity. Aaron apparently owed $1.368 million to the IRS alone. He further listed an average monthly income of $2000 and average monthly expenses of $2005.. At the time of filing, Aaron was living with a relative and claimed his most valuable physical assets were a $500 television, two MacBook computers, a Louis Vuitton backpack and a $3500 Breitling watch. Aaron was recently in the news in September 2019 when his brother Nick Carter took out a restraining order against Aaron, citing a fear that Aaron had threatened to harm Nick's family.

Anonymous
@ 2022-11-06 02:31:41
I'm confused as he had written a tweet not long ago regarding putting house up for sale and a link which shows another house not to far from the one you have. Yours has 3 bedrooms and his listing has 7 bedrooms. Bluefax just sold a few months ago and is not for sale!