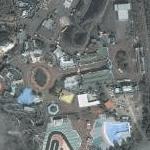 The park had many faults that added up to its unpopularity. One of the major faults is that the park looked very cheap and dirty. Many of the Disneyland knock off rides were usually broken or dirty. The park was almost always deserted. Because of its unpopularity the park would usually see only a few dozen people a day, if that.
Links: en.wikipedia.org
6,770 views