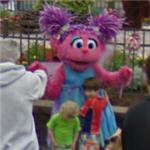 By kjfitz @ 2010-01-22 08:40:48
@ 40.185043, -74.872055
Middletown, Pennsylvania (PA), US
Abby "Abigail" Cadabby is a fairy-in-training who first appeared in 2006 in the 37th season of the children's television show Sesame Street. She is performed by Leslie Carrara and was designed by Ed Christie and built by Rollie Krewson. The first new female Muppet on Sesame Street in 13 years, she is a playmate of Elmo, Zoe, Baby Bear and the rest of the Sesame Street gang. Being the new girl on the block, she is meant to bring a further opportunity to share lessons on the differences of people from different backgrounds and cultures.
Links: en.wikipedia.org
848 views