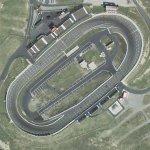 Previously known as Southern Speedway, it was built as a 1/3 mile dirt track in 1956 by Roy Maddren. In 1984, it was enlarged to a 3/8 mile circuit. In 1990, the track was paved and became a NASCAR sanctioned Winston Racing Series member track.

In 1999, the track was enlarged to it's present 4/10 mile size, and the banking in the turns was increased to 12 degrees. Numerous other improvements have been made to the pit and spectator areas in recent years, making this a first-class facility.
Links: www.acespeedway.com
762 views