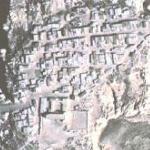 By mlc1us @ 2009-11-26 17:33:15
@ 34.895972, -107.582084
Grants, New Mexico (NM), US
The Pueblo, believed to have been established in the 12th century or even earlier, was chosen in part because of its defensive position against raiders. It is regarded as the oldest continuously inhabited community in the United States. Access to the pueblo is difficult as the faces of the mesa are sheer. Before modern times access was gained only by means of a hand-cut staircase carved into the sandstone.
Links: en.wikipedia.org
921 views