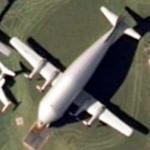 By kjfitz @ 2006-01-19 23:37:24
@ 53.542577, 9.84302
Hamburg, Germany (DE)
Based on the Boeing C-97 cargo plane and the 377 airliner the huge "Guppy" super-transports are some of the most unique aircraft ever built. Designed to carry very large, but relatively light cargos the Guppies were built from parts of retired U.S. Air Force C-97 Stratofreighters and airline 377 Stratocruisers. The planes proved to be very useful for carrying segments of rockets and much of the Saturn rocket that powered the Apollo Program was transported in the Super Guppy. This is the second Guppy, the first "Super Guppy" built. Its parts came from at least two different aircraft. The majority of the airframe came from a former Pan American Airways airliner. However the wings, engines and forward fuselage came from one of the Air Force's experimental turbo-prop powered YC-97J aircraft, 52-2693. The Super Guppy continued in use by NASA until 1991 when it was retired in favor of a younger Super Guppy.

Anonymous
@ 2006-01-20 02:55:35
3 Guppy planes in 1 day you added so how do you get an idea like that to locate in the world 3 guppy planes? when you add stuff in batches do you borrow ideas from other sites or all original ideas of yours to locate similar stuff around the world or areas.?

Sometimes I come across a list of interesting locations and go through the list looking for each. For example the Nike Missile sites. Other times I happen across one and then while looking for more info to add to the description I come across references to others of the same type.

In this case I was looking around the boneyard at Davis-Monthan and saw the first Guppy. Research said there was a second in he Pima Air Museum close by. That lead to one more coming up in Google and another someone had mentioned when posting the Hamburg airport. I thought these planes were really unique but I just found a definitive list of like a hundred or more of these planes and where they are. Not sure I'll post all those though.

I get a lot of my recent postings from Google Earth. I pick an area and scan back and forth around the area bookmarking everything that looks 'different' or 'interesting'. Alot of the obvious stuff has already been bookmarked so I don't need to do much research so I guess you could say I copy those from GE. (Though a very high persentage of GE postings have bad names and data.) Others aren't in GE so I google araound until I figure out what it is.