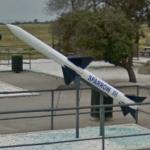 By kjfitz @ 2013-09-10 09:49:21
@ 34.132186, -119.10038
Point Mugu, California (CA), US
The AIM-7 Sparrow is an American, medium-range semi-active radar homing air-to-air missile operated by the United States Air Force, United States Navy and United States Marine Corps, as well as various allied air forces and navies. Sparrow and its derivatives were the West's principal beyond visual range (BVR) air-to-air missile from the late 1950s until the 1990s. It remains in service, although it is being phased out in aviation applications in favor of the more advanced AIM-120 AMRAAM. The Self-Defence Forces of Japan also employ the Sparrow missile, though it is being phased out and replaced by the Mitsubishi AAM-4. NATO pilots use the brevity code Fox One in radio communication to signal launch of a Semi-Active Radar Homing Missile such as the Sparrow.

Concurrently with the development of the Sparrow I, in 1951, Raytheon began work on the semi-active radar homing version of Sparrow family of missiles, the AAM-N-6 Sparrow III. The first of these weapons entered United States Navy service in 1958.
Links: en.wikipedia.org
605 views