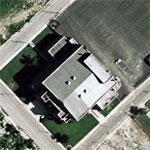 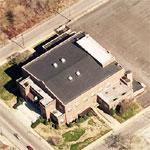 At the time of completion in late October of 1923, there were 125 other such temples in the United States. But this magnificent example of Moorish architecture was second to none. It housed splendid rugs, furniture and other trappings from the Orient.

The terra cotta of desert mosques from centuries ago are reflected in this building. Rounded arches supported by Arabesque columns grace the entrance. The plush desks, chairs and lounges inside, on which pashas of old might have sat when they entertained, adorn the halls and offices inside the front doors.

Built at a cost of $550,000, the cornerstone was laid in November of 1922 by the Grand Lodge of Ancient Free and Accepted Masons of Illinois. Jesse Gedney Contracting Co. oversaw the construction. Numerous subcontractors assisted in the project including: East St. Louis Stone (crushed rock), Hill-Thomas (cement and sand), Phelan-Faust (paint), B. Goedde Co. (lumber), Moore Brothers (drayage) and St. Louis Structural Steel did the framework. One hundred men worked eight months to finish the job. It was estimated that had one man done all the work, it would have taken him 67 years. One hundred and fifty carloads of fill dirt were needed to complete grading and landscape.

Although the facility was designed primarily for the use by the Masonic Fraternity for its meetings, it became a gathering place for numerous community events in the life of East St. Louis. The annual Pageant of Progress was held there. The Elks Club and many other civic groups used the place for social activities. The auditorium was the largest of its kind in the state, seating 2,500. The grand stage was an impressive 78'x3O' and featured a $15,000 pipe organ, the latest lighting and sound equipment, with dressing rooms on each side. It was host to East Side High's home basketball games and their commencement services took place there every January and June.

There is a large concrete ramp that goes from street level to the basement. There is a cavernous banquet room on the lower level with seating for 1,000. The room is equipped with a large and modern kitchen. Food can be served cafeteria style or by waiters. The wide incline to the lower level made the building ideal for automobile shows.

On the day of the dedication, 10,000 Shriners (from all over the country) came to the ceremony. The main speaker was the Imperial Potentate from New York. A huge parade was then held with over 5,000 participants. The parade went down Collinsville Avenue and took approximately one hour to pass a specified point along the way.
Links: www.builtstlouis.net
1,007 views