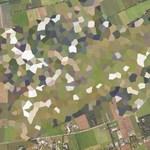 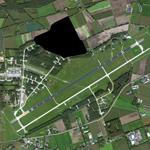 On the base are still located both the hardened former nuclear QRA alert facility and the former igloo Weapon Storage Area, now transformed into a conventional weapon storage.

The base hosts 32 above-ground Protective Aircraft Shelters (PAS). 11 of these are equipped with underground nuclear weapon vaults with a capacity for a total of 44 B61 nuclear bombs (types 4 and 10; variable yield 0.3 − 170 kt). Though the Ministry of Defense denies this the fact is that at present still 22 B61's are fully operational at Volkel Airbase. These weapons are located among others in the shelters 532 534 and 540 according to USAF NSI reports. These standoff weapons are deployed by the USAF in the Netherlands under a nuclear sharing treaty, for delivery by Dutch F-16s. 703 MUNSS (USAF Munition Support Squadron) is with 135 personnel responsible for physical security, maintenance and logistics of these special weapons, for the Weapon Storage Security System W3S and for the handover to the Dutch if ordered by the U.S. National Command Authority.
Links: en.wikipedia.org
3,228 views