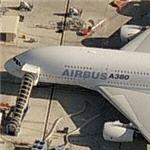 The A380's upper deck extends along the entire length of the fuselage. This allows for a spacious cabin with 50% more floor space than the next largest airliner, the Boeing 747-400, and provides seating for 555 people in standard three-class configuration or up to 853 people in full economy class configuration. Two models of the A380 are available. The A380-800, the passenger model, is the largest passenger airliner in the world, superseding the Boeing 747. The other launch model, the A380-800F, will be one of the largest freight aircraft and will have a payload capacity exceeded only by the Antonov An-225.

The A380 is notably in direct competition on long haul routes with the Boeing 747-8, the current new development of Boeing's largest airliner, also being developed and pre-sold at a similar time. For airlines seeking very large passenger airliners, the two have been pitched as competitors on various occasions. Following delays to the A380 program some airlines switched (or stated they are considering switching) their orders to the 747-8 instead.
Links: en.wikipedia.org
2,827 views