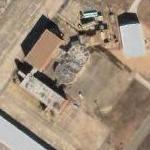 A top FBI expert on the al-Qaeda terrorist network testified in court today that the agency knew before the Sept. 11, 2001, attacks that the group's leader, Osama bin Laden, had sent followers to an Oklahoma flight school to train as pilots and was interested in hijacking airplanes.

FBI agent Michael Anticev said investigators understood that bin Laden used the flight school in Norman, Okla., to train pilots to fly his own aircraft. He also acknowledged that the FBI knew before the Sept. 11 attacks that al-Qaeda was training pilots to hijack planes, but he said the agency believed the aim was to carry out conventional hijackings and fly the aircraft to other countries, rather than crash them into buildings.

In 1998, FBI agents questioned officials from Airman Flight School in Norman, Okla, about a graduate later identified as a pilot for bin Laden, the Post reported. Ihab Ali Nawawi, a bin Laden associate whose name surfaced during a trial for the 1998 U.S. Embassy bombings in East Africa, obtained a commercial pilot's license from Airman in the early 1990s before going to another school in Oklahoma City to take another course.
Links: web.archive.org
3,425 views