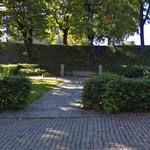 After the war the site was used to execute Norwegian Nazi leaders of the party Nasjonal Samling , among them their leader Vidkun Quisling who was Prime Minister from 1942 to May 9. 1945 when he was arrested after Germany surrendered.
Links: lokalhistoriewiki.no
735 views