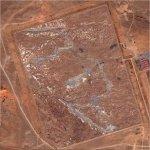 By mlc1us @ 2009-04-14 01:54:24
@ 38.266102, 105.950217
Huangyangtan, China (CN)
A 1:500 scale terrain model of eastern Aksai Chin and adjacent Tibet, built near the town of Huangyangtan, about 35 kilometres South West of Yinchuan, the capital of the autonomous region of Ningxia in China. A visual side-by-side comparison shows a very detailed duplication of Aksai Chin in the camp. The 900m × 700m model was surrounded by substantial facility, with rows of red-roofed buildings, scores of olive-colored trucks and a large compound with elevated lookout posts and a large communications tower. Such terrain models are known to be used in military training and simulation (although usually on a much smaller scale)...Wikipedia

A Google Earth overlay which places the terrain model over the actual terrain is available at the GE Community Forum - http://bbs.keyhole.com/ubb/ubbthreads.php?ubb=showthreaded&Number=503759
Links: en.wikipedia.org
5,774 views