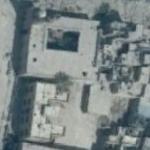 By nico @ 2013-04-07 18:35:03
@ 36.196, 37.16342
Aleppo, Syrian Arab Republic (SY)
Al-Otrush Mosque (Arabic: جامع الأطروش‎) also known as Demirdash Mosque, is a mosque in the Syrian city of Aleppo, located at the south of the Citadel, in "al-A'jam" district of the Ancient City, few meters away from Al-Sultaniyah Madrasa. It was built at the end of the 14th century by the efforts of the Mamluk ruler of Aleppo; Aqbogha al-Otrush. However, the mosque was completed by his successor Demirdash al-Nasiri.

The mosque is famous for its decorated façade and its entrance which is topped with traditional oriental motifs and Islamic muqarnas. The minaret of the mosque located to the left of the main entrance, has a round octangular shape.

The mosque was renovated in 1922.
Links: en.wikipedia.org
470 views