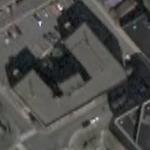 The Alaska State Capitol was originally the Federal and Territorial Building, but under provisions of the Alaska Statehood Act (approved July 7, 1958), became the property of the State of Alaska.

Funds appropriated by Congress in 1911 to pay for the purchase of the Capitol Building site were sufficient to pay for only half of the block on which the building is located. The citizens of Juneau raised the additional money needed to buy the remainder of the site and presented the property to the government. Ground was broken September 18, 1929. The future capitol building was completed on February 2, 1931, and formally dedicated on February 14, 1931.

The site and completed building represented an investment of approximately $1 million. Construction is of brick-faced reinforced concrete. The lower façade is faced with Indiana limestone. The four columns of the portico and the interior trim are of light and dark Tokeen marble from quarries at Tokeen, Prince of Wales Island, in Southeast Alaska. Alaska has one of the few capitol buildings that lacks a dome.
Links: www.commerce.alaska.gov
1,252 views