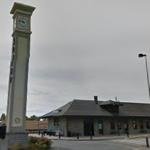 By kkeps @ 2013-12-12 10:46:49
@ 44.630976, -123.102647
Albany, Oregon (OR), US
The station was constructed in 1909 for the Southern Pacific Railroad and is built of masonry. It is one of the oldest continuously operating passenger rail stations in the U.S. Beginning in 2004, the station and the surrounding area underwent an $11.3 million restoration that was funded with a combination of federal, state, local, and Amtrak money. The Oregon Department of Transportation was in charge of the project. The station was rededicated on April 18, 2006. The City of Albany is in the process of restoring the former Railway Express Agency building nearby as offices for the city's transit system.
Links: en.wikipedia.org, virtualglobetrotting.com
384 views