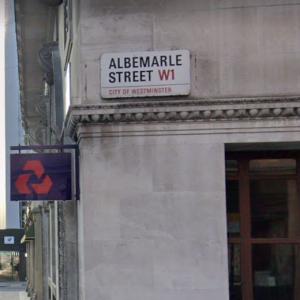 Amongst notable former residents was Robert Hartley the 1st Earl of Oxford and the 1st Viscount Churchill was born at number 32.

In more recent times the street is home to several art galleries, offices, other small commercial undertakings as well as The Royal Institution and Brown’s Hotel.
Links: www.waymarking.com
93 views