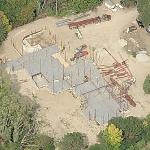 Alex Shnaider partnered with Donald Trump in the construction of the Trump International Hotel and Tower, which is currently under construction in Toronto. Donald Trump is a minority shareholder in the project. Shnaider has reportedly decided to keep the penthouse suite for himself, at an estimated value of $20 million.
Links: en.wikipedia.org
4,303 views