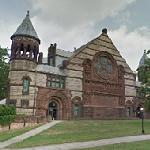 By Mike1989 @ 2013-04-01 02:33:13
@ 40.347834, -74.660695
Princeton, New Jersey (NJ), US
Alexander Hall is a 1,500-seat Richardsonian Romanesque assembly hall, at Princeton University, in Princeton, New Jersey
The name honors three generations of members of the Alexander family who served as trustees to the University. Mrs. Harriet Crocker Alexander donated the money for such a building to be named in honor of her relatives: her husband Charles B. Alexander ’1870, his father Henry M. Alexander (class of 1840), a college trustee and member of the Committee on Commencement Arrangements, and his grandfather Reverend Dr. Archibald Alexander (founder of the Princeton Theological Seminary and its first professor, honorary Princeton doctorate ’1810) It was built to accommodate large meetings and commencement for students and faculty. Over time, the Hall became available to the public and now holds town meetings as well as visiting concert groups. Many vocal and performing groups seek this auditorium because the acoustics inside the rusticated brown-stone and red granite walls and turrets rival Carnegie Hall.
Links: en.wikipedia.org
535 views