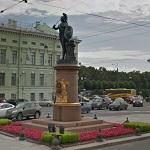 This monument is dedicated to Suvorov as a youthful Mars, Roman god of war. It was created by Mikhail Kozlovsky in 1801.
Links: en.wikipedia.org
380 views